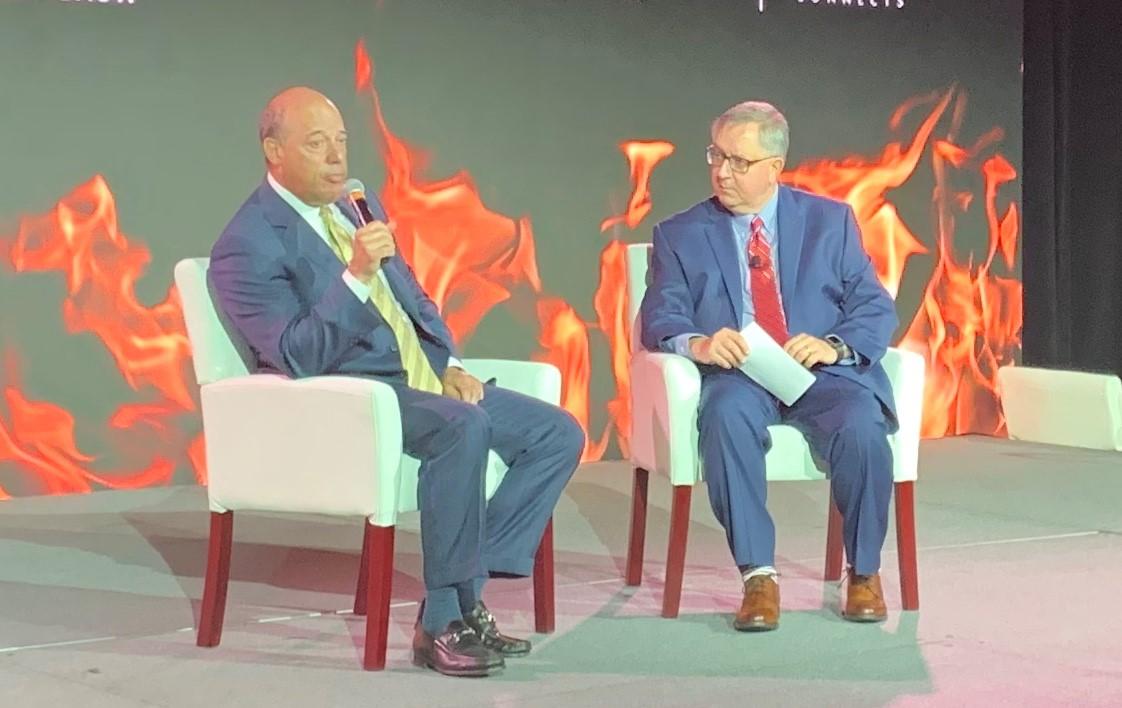 CHICAGO July 30, 2019 — Former White House Press Secretary Ari Fleischer today spoke before ACA Connects members at the Independent Show, offering key advice that included the need to capitalize on the centrality of their role as local communications providers in thousands of communities in rural America. Mr. Fleischer in his comments stressed that ACA Connects members possess a strong voice and message and that those dual strengths should help sustain them in policy battles in Washington, D.C., regardless of the party in charge.

“Activism is really the heart of what you have to do,” Mr. Fleischer said. “If you are not involved, you are going to lose.”

Mr. Fleischer spoke for about 30 minutes on a range of issues, including a look at the forces helping to shape the 2020 presidential campaign, before taking questions from ACA Connects President and CEO Matthew M. Polka and others.

“On behalf of our members, we thank Ari Fleischer for joining us and sharing his observations. Our members enjoyed hearing Mr. Fleischer’s insights on how to prepare an effective advocacy program in Washington D.C., that is strong enough to endure the inevitable shifts in political power,” Polka said.

Mr. Fleischer spoke to hundreds of ACA Connects members, providing insights into the current political battles in Washington, D.C., and encouraging those in grassroots America to be sure that their voices are heard to safeguard their interests as best as possible, whether the issue is a complicated one like Net Neutrality or something else in the dynamic communications policy space.

Mr. Fleischer stressed the need to keep in touch with Capitol Hill lawmakers.

“If you are not in their offices, both in the districts and in Washington, you will lose because your issue is intricate and hard to understand for most people, not to mention most congresspeople,” Mr. Fleischer said.

Polka agreed with the approach suggested by Mr. Fleischer. “The next few years are pivotal for our members as they develop new broadband-based products. Mr. Fleischer’s advice and expertise as a renowned global strategist are incredibly valuable as we plan for our future,” Polka said.

Drawing on his expertise developed during his White House tenure as well as a global consultant, Mr. Fleischer encouraged ACA Connects members to showcase their technology investments that open new avenues. He addressed how best to utilize strategic communications in a changing media environment.

Mr. Fleischer acknowledged that the future media landscape could be even more challenging, and he encouraged members to create a tradition of success and innovation.

Prior to serving as White House Press Secretary for President George W. Bush, Fleischer served as the senior communications advisor and spokesman for the Bush-Cheney presidential campaign and communications director for the House Ways and Means Committee.

About ACA Connects: America’s Communications Association – Based in Pittsburgh, ACA Connects is a trade organization representing more than 700 smaller and medium-sized, independent companies that provide broadband, phone and video services to nearly 8 million customers primarily located in rural and smaller suburban markets across America. Through active participation in the regulatory and legislative process in Washington, D.C., ACA Connects’ members work together to advance the interests of their customers and ensure the future competitiveness and viability of their business. For more information, visit: http://www.ACAConnects.org