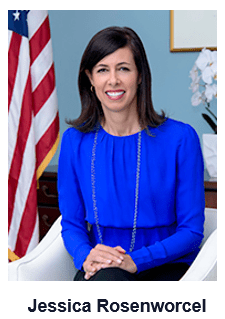 Named as one of POLITICO’s 50 Politicos to Watch and profiled by InStyle Magazine in a series celebrating “women who show up, speak up and get things done,” Commissioner Rosenworcel brings more than two decades of communications policy experience and public service to the FCC.

Commissioner Rosenworcel, who is the most senior Democratic Commissioner at the agency, is a strong advocate for, and defender of, consumers and the public in general. During her Summit appearance, Commissioner Rosenworcel will engage in a one-on-one interview with ACA Connects Chairman Patricia Jo Boyers, who is President of BOYCOM Vision, a video and broadband provider with 3,000 customers in Poplar Bluff, Mo.

Commissioner Rosenworcel is a leader in spectrum policy, developing new ways to support wireless services from Wi-Fi to video and the Internet of Things. She also is responsible for developing policies to help expand the reach of broadband to schools, libraries, hospitals, and households across the country.

The ACA Connects Summit will be held March 17-19 at the Grand Hyatt in Washington, D.C. #Summit2020 will be the official social media hashtag for the event. Registration information is available at https://www.acasummit.org/

The ACA Connects Summit is a special event where independent video and broadband companies serving hometown America connect with the leading lawmakers and regulators as well as media representatives on the communications policy beat in Washington, D.C.

ACA Connects’ more than 700 members play a unique role in providing best-in-class communications services to millions of consumers, many living and working in rural areas of the country. Created in the early 1990s, the ACA Connects Summit gives independent providers a vehicle for framing the diverse and complex issues in their own words during dozens of meetings with lawmakers and staff on Capitol Hill and with regulators at the FCC.