ACA Connects Is Keeping Up With The Times 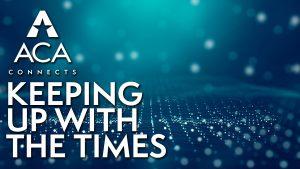 ACA Connects Is Keeping Up With The Times

We all want a better America.  Communications technology is viewed as central to achieving that goal.  Massive adoption of broadband Internet access is one of most important and powerful actions taken by consumers in the history of communications.  Poised and assured, ACA Connects members are excited to be central players in all of this, deploying broadband facilities in small and rural communities that are their homes.

At the same time broadband penetration continues to soar, another shift is occurring.  Consumers are gravitating to online streaming services – so called over-the-top (OTT) services offered by Netflix, Hulu and Amazon Prime – while at the same time dropping traditional video service.  For many, the cable TV bundle grew too large and too expensive and no longer functioned as a “must have” item when OTT providers have great entertainment programming at lower price points.

Personally, I view cord-cutting as a totally reasonable consumer response to escalating price hikes imposed through retransmission consent by TV station owners and networks and by many cable programmers, especially channels that offer live sports like NFL, MLB, NHL, and NBA contests.  ACA Connects has been a leader in calling on content companies to give consumers more choice, but those calls went unheeded and, shockingly, still do.  Not surprisingly, as cable subscribership continues to decline, the content owners are the ones feeling the most pain.

All of that is prelude to my main point:  This fast-moving marketplace requires a nimble strategy by ACA Connects.  In the past, eligibility for ACA Connects membership kept to a fairly straightforward standard:  Is the company a cable TV provider?  Today, ACA Connects leadership believes that with so many companies seeing broadband as their lead product, membership eligibility needs to embrace entities that offer only broadband Internet access, meaning they are not providers of traditional cable TV service.

ACA Connects, by a vote of hundreds of its members, approved new bylaws that will allow open membership in the organization to companies that provide only broadband Internet access.  Previously, all company members of ACA Connects had to be “cable television” operators as defined by the Federal Communications Commission.

You could call the action a savvy prediction by executives on the broadband frontlines.  Just a few ACA Connects members have actually terminated cable TV service.  But few believe that this will be the status quo for long.  As time rolls on, more and more cable TV companies will decide to sunset that side of their business, refusing to let nostalgia for the MTV era stand in the way of a sound business move.

Membership diversity is a strength.  The more players we have on our side, the more successful we will be in the many public policy battles that await, both in Washington, D.C., and in state capitals — some of which have already decided to adopt laws that run counter to steps taken by the FCC to restore a light touch of regulation on ISPs, allowing market forces and investment to drive broadband deployment.

Our goal is admittedly ambitious:  To represent all the independent ISPs across the nation, whether offering video and high-speed data or selecting to feature just broadband.  Specific yet inclusive, the new bylaws should serve to encourage agile and entrepreneurial digital business leaders in small and medium-sized communities to join the organization.  It will be an honor to advocate on their behalf and tell the powers that be about all the great things they are doing to build a better America.